At the outbreak of war, the RAF had two types of airfield that could be used by the bomber squadrons:

These airfields all had grass take-off and landing strips which were not suitable for the heavier aircraft that were being brought into service.

In 1940 a “Wartime Design” for bomber command airfields was issued which incorporated a perimeter track, hard runways (3 x 1000yds) and hardstandings.

Some of the existing airfields were closed down whilst these facilities were added, others remained opened whilst the work was undertaken.

It is worth noting that the changes to the layout of the bomb store area meant that some existing airfields ended up with two stores (one pre-war type and one WWII type).

The design specification for airfields, in particular runway lengths, was changed three times before the Air Ministry finally settled on the “Class A” standard design in July 1941.

The various changes meant that some of the upgraded airfields had to be closed for a second time to enable the new hard runways to be extended to the revised length (1 x 2000yds, 2 x 1400yds)

From July 1941 onwards, all new airfields were constructed in accordance with the Class A standard utilising less permanent structures such as Nissen huts / Laing huts.

Design changes during the war resulted in:

RAF Graveley was a Class A airfield constructed during WWII 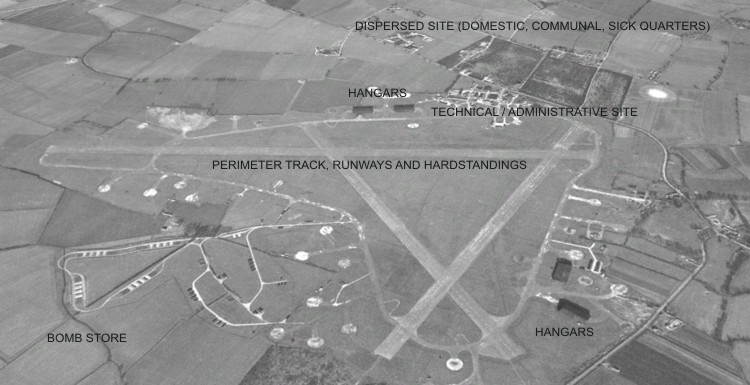 The layout at RAF Graveley

Living quarters, communal areas and sick quarters for the thousands of men and women that made up the aircrew and ground staff at each base were in one of the “dispersed sites”.  For safety reasons, these sites were constructed in the fields, well away from the main airfield.

The dispersed sites at RAF Graveley