PLEASE NOTE THAT THIS PAGE CONTAINS DETAIL REGARDING CECIL’S REINTERMENT

On the 1st May 1947, 39 Graves Registration Unit conducted the exhumation of the bodies of the crew from Beuel New Cemetery (as requested by the Missing Research and Enquiry Service [MRES]).

Various items found on the remains, including items of clothing, rank badges and flying brevets enabled identifications to be made. Cecil was identified by his Service Number which was found on his shirt. The MRES report stated that his remains were dressed in:

Following the exhumation and identification, Cecil was laid to rest with his colleagues in Rheinberg War Cemetery.

The photograph shows the graves and temporary crosses of RM Jenkins (Plot 11.B.6) and GB Thomas (Plot 11.B.7) at Rheinberg. 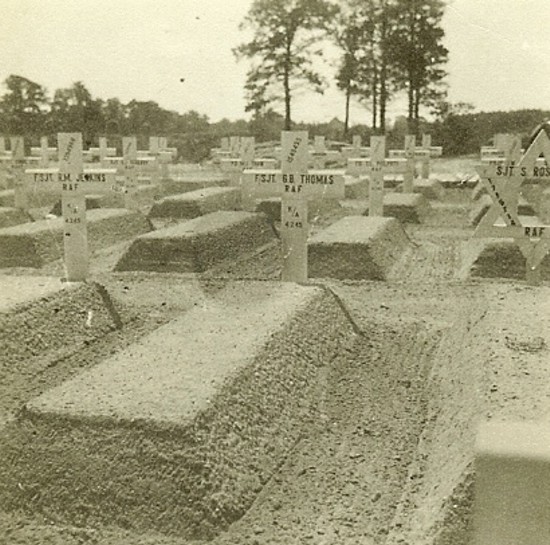 On 4th September 1947, the Air Ministry sent the following information to the next of kin:

On the 8th August 1950, the Under Secretary of State for Air sent the next of kin a photograph of the temporary cross that marked the grave at Rheinberg. The following is a copy of the photograph sent to the family of G B Thomas (Navigator ME334)

The temporary crosses were subsequently replaced by permanent headstones, but it has not been possible to establish when this occurred. 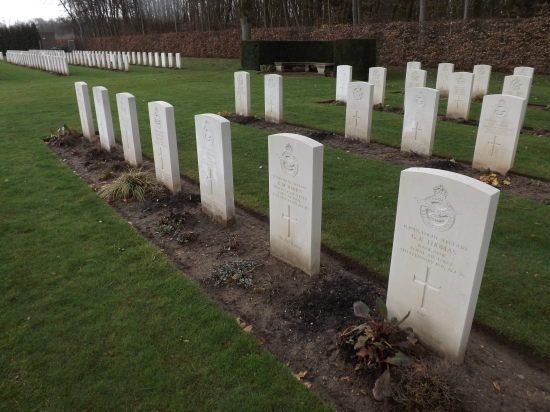 >> Commemoration – The Nations’ Thanks