35 Squadron ORB: In the evening, 5 aircraft took part in an attack on the marshalling yards at Osnabruck. The target was visually identified and many fires were started.

Aircraft Used: 98 Halifaxes and 20 Lancasters of Nos 6 and 8 Groups attacked Osnabrück, with the cutting of railway communications being one of the raid’s objectives.

Summary: The marking and bombing were accurate but no details are available. 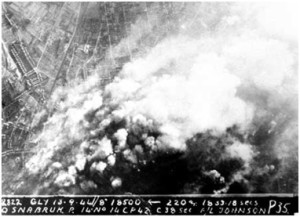 Image taken during the raid